During his final stay at the mental asylum at St. Rémy de Provence in 1890, the famous Dutch painter Vincent van Gogh (1853-1890) created an oil painting which he titled “Sorrowing Old Man” and “At Eternity’s Gate” (sometimes “On the Threshold of Eternity”). It depicts an old man seated by the fireside, bent over with his fists clenched against his face as though he were weeping.

“Bent over with his fists clenched against a face hidden in utter frustration, the subject appears engulfed in grief. Certainly, the work would convey an image of total despair had it not been for the English title van Gogh gave it, At Eternity’s Gate. It demonstrates that even in his deepest moments of sorrow and pain, van Gogh clung to a faith in God and eternity, which he tried to express in his work.”1

The painting was based on an earlier litograph and pencil drawing which Vincent van Gogh had given the title “Worn Out”. He commented on this drawing in a letter addressed to his brother in 1882, saying:

“It seems to me that a painter has a duty to try to put an idea into his work. I was trying to say this in this print — but I can’t say it as beautifully, as strikingly as reality, of which this is only a dim reflection seen in a dark mirror — that it seems to me that one of the strongest pieces of evidence for the existence of ‘something on high’ in which Millet believed, namely in the existence of a God and an eternity, is the unutterably moving quality that there can be in the expression of an old man like that, without his being aware of it perhaps, as he sits so quietly in the corner of his hearth. At the same time something precious, something noble, that can’t be meant for the worms. Perhaps the most wonderful passage in Uncle Tom’s cabin is the one where the poor slave, sitting by his fire for the last time and knowing that he must die, remembers the words:

Let cares like a wild deluge come,
And storms of sorrow fall,
May I but safely reach my home,
My God, my Heaven, my All.

This is far from all theology — simply the fact that the poorest woodcutter, heath farmer or miner can have moments of emotion and mood that give him a sense of an eternal home that he is close to.”2

The desire for a home must have been one of Vincent van Gogh’s deepest longings. His parental home was not a very pleasant one for him. “My youth was gloomy and cold and sterile,” he once confided to his lifelong friend and brother Theo van Gogh, who provided him with financial and emotional support.3 For some reason he never grew close to his parents. As a young adult he was also rejected by the woman he loved. Another relationship that might have made for a happy marriage was frustrated by the families on both sides, eventually causing the anguished woman to attempt suicide. Yet in spite of the tragedy which he experienced, Vincent van Gogh also caught a glimpse of that eternal hope which shines beyond the shadows of our deepest pain.

In a rare expression of his own religious sentiments he said:

“My intention with these two and with the first old man is one and the same, namely to express the special mood of Christmas and New Year. At that time, in both Holland and in England, there’s still always a religious element, everywhere in fact, at least in Brittany and Alsace too. Leaving aside whether or not one agrees with the form, it’s something one respects if it’s sincere, and for my part I can fully share in it and even feel a need for it, at least in the sense that, just as much as an old man of that kind, I have a feeling of belief in something on high even if I don’t know exactly who or what will be there. I like what Victor Hugo said: religions pass, but God remains.”4

Vincent van Gogh was haunted throughout his life by depression and loneliness and suffered serious mental problems. He found comfort, however, in the contemplation of God and eternity. On July 27, 1890, two months after completing his painting, he shot himself in a delirium. He died two days later at the age of 37.

The sorrowing old man in his painting seems to reflect something of van Gogh’s own struggle, while its title—At Eternity’s Gate—testifies to the comfort he found in the thought of God and eternity. He had a sense of an eternal home that he was close to, but never really knew the God He sensed to be there. The Bible teaches that we can actually know the God of all comfort and the Father of mercies. Jesus once said:

“And this is life eternal, that they might know thee the only true God, and Jesus Christ, whom thou hast sent.” (John 17:3).

4Vincent van Gogh, The Letters, To Theo van Gogh. The Hague, between about Wednesday, 13 and about Monday, 18 December 1882. 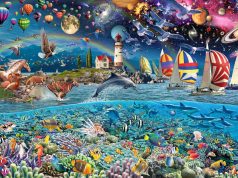 Natural Law: The Philosophical Foundations of the New Roman Empire